Today was a busy day today! For the third consecutive year, we held a week 0 competition (and for the first time, it was actually at the high school). The week 0 competition is an unofficial competition that gives teams in the area an opportunity to test their robot in a more realistic environment before the official competitions start. As one of the 22 teams that both registered to attend and made it to the event, we found many potential design improvements that could be made to our robot.

Above: A video containing several matches that we played at Week 0. The video more clearly demonstrates several design problems/successes that are described below.

As a recap, the parts for the climber hook were

Above: A YouTube video showing the climber work for the first time ever. 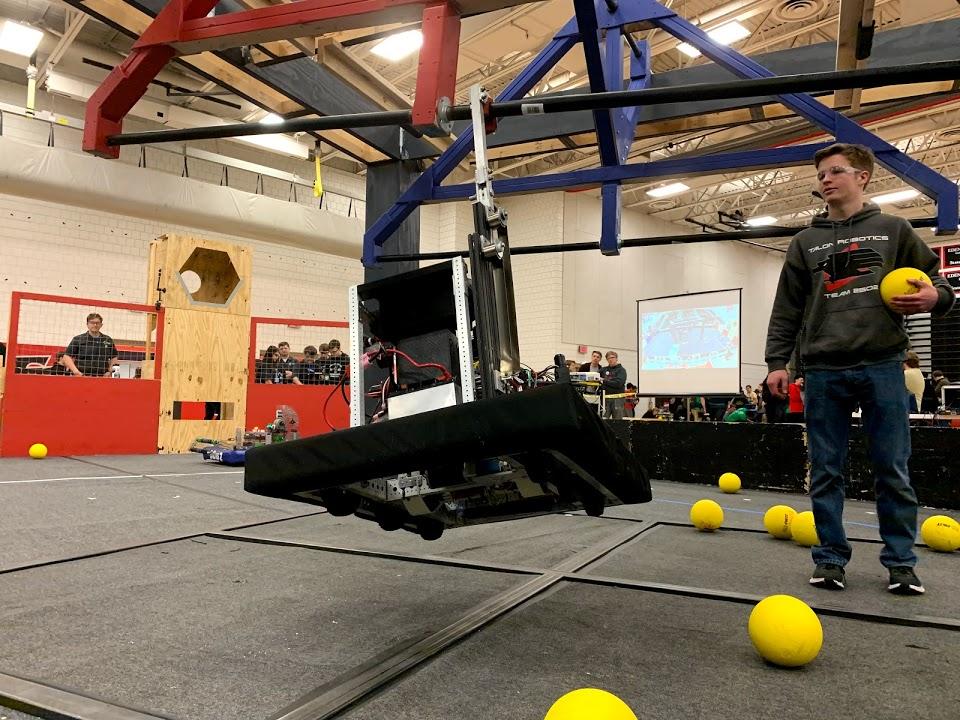 Above: A photo highlighting the ample ground clearance between the hanging robot

As seen in both the video and the picture, the climber is able to lift the robot. We did, however, run into some issues and discover some potential improvements. One issue was that the winch rope used to get caught between the winch barrel and the winch-supporting bearing. This problem is much like one we encountered in 2019 with Major Tom’s climber winch. To fix this issue, we bolted a washer (#6-32 screws; it was a tight fit) to the end of the 1” hex tube. We also prefilled the gap with scrap rope in order to prevent more rope from going into the gap.

Once the climber was fixed, we were able to start using it in matches. In one match, we climbed (and balanced) with a partner.

We encountered an issue with our drivetrain today: the shaft on one of the Falcons came loose. We removed the Falcon from the drivetrain so that our robot can safely run tomorrow at a corporate demo, but we will have to inspect the Falcon in greater detail and fix the shaft at a later date.

On its own, the intake worked reasonably well. Although there are some occasional compression issues when the ball touches both the floor and the bumper, the ball is able to pass over the bumper and through up to the lemon squeezer. However, due to problems with the lemon squeezer, not all balls taken in by the intake make it to the hopper.

For the unacquainted, the Lemon Squeezer is the part of the robot that helps to guide balls from the active intake into the hopper. It helps to ensure that squeezed lemons (Power cells) stay inside the hopper and only leave the hopper when we throw them into the power port.

We ran into some issues with the lemon squeezer.

Above: A picture showing the ball stuck in the hopper plate

Above: A ball inappropriately exiting the intake pipeline as described above

Today, we used the shooter. It works pretty well to send balls from the hopper to the outer port when the robot is at about the initiation line. It does not work as well to send balls to the inner port (improvements to automated vision alignment will be required for that). We confirmed that it is able to make shots from the end of the trench, as designed. We still need the shooter to be more precise.

Above: A video showing the robot shooting into the power port

Above: The second shooter hood. It is the natural color of PEI (polyetherimide, the chemical name for Ultem), also referred to as “Robonauts Gold,” among other names 🙂

We made some minor fixes to the robot so that it can run at a corporate demo tomorrow. Most importantly, we started the process of removing and fixing the Falcon with the wobbly shaft.