MRI, which stands for Minnesota Regional Invitation, was our second offseason event this year. We want to get as much experience since most of our team graduated within the last two years, and we haven’t had many chances to give our newer team members some experience in a tournament setting.

Unlike most other teams, we had two robots competing, our competition bot, and our practice bot, which was referred to as 9902, instead of 2502, and had black bumpers.

The event itself started at 8 AM and ended at 5 PM. Throughout the day, we were constantly getting our robots ready for the next match, as well as spending a considerable amount of time scouting other teams.

We had a total of eight matches for each robot before moving on to playoffs. Throughout the day, our competition robot had a lot of mobility, but there were some issues with shooting power cells that required some driver correction, which was also troublesome, since we had relatively new drivers at this event. Our practice robot was also feeling very sluggish, for reasons that we have not yet explored.

However, near the end qualifications, we were able to consistently score with both robots. They were also consistently climbing throughout the day, both achieving several double climbs with other teams. Unfortunately, but not for lack of trying, we were unable to complete a triple climb. At the end of qualifications, our robots were ranked in the top 15, with our competition bot ranked 7th place and our practice bot ranked 11th. 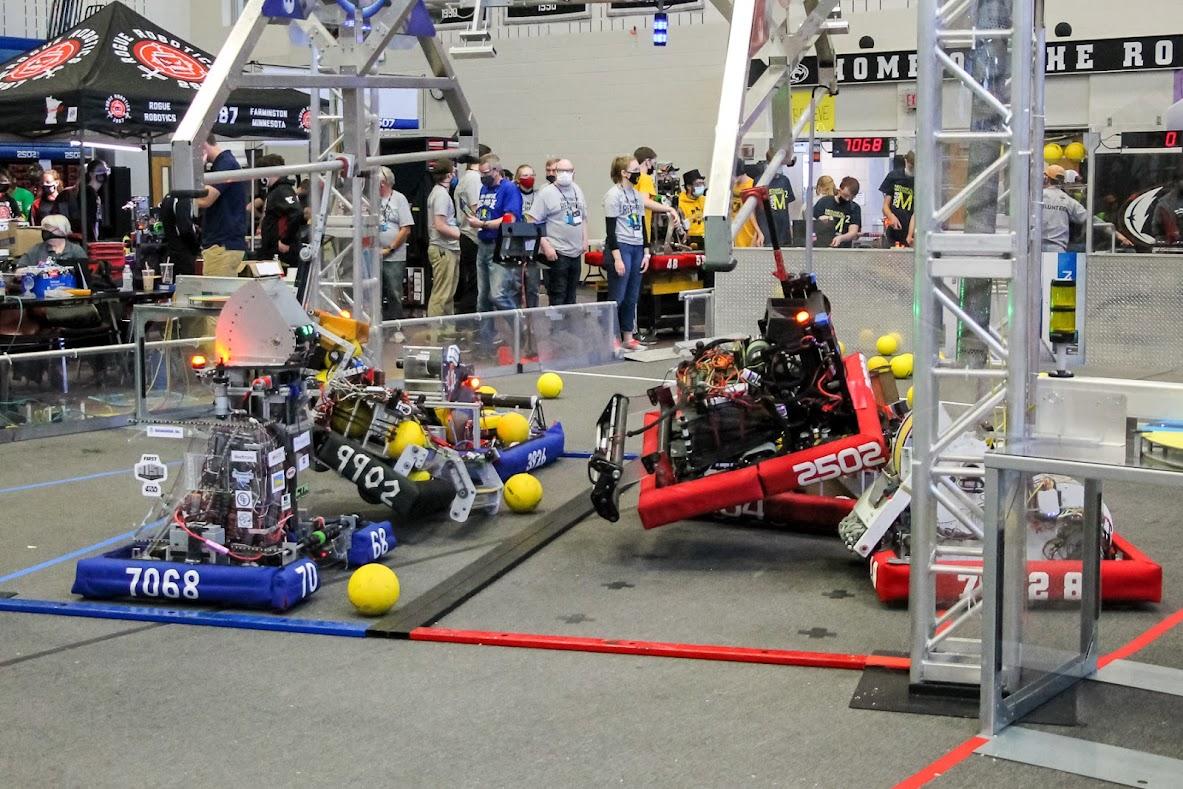 Team 2502 was chosen by the 4th alliance captain Ultraviolet 2129

During the first match in playoffs, our competition bot did really well in terms of scoring power cells. However, during our climb, the rope we used to winch our robot up snapped. Because of this, we were unable to climb. However, Ultraviolet was very generous, and gave us some kevlar rope, which was way stronger than the rope we were using earlier.

The results of the first playoffs were debated upon after the match. At first, they had declared the Alliance 4 the winner of the match, but later declared Alliance 1 the winner.

In our rematch against Alliance 1, we were consistently scoring as we did in the first match. Additionally, we were also able to climb. However, despite a great match, we still lost, and were ultimately knocked out of the playoffs.

Although we did lose, we really want to thank team 2129 Ultraviolet for choosing us during playoffs, and team 3276 TOOLCATS and team 2177 The Robettes for being great teammates!

The practice bot, or team 9902, was selected by team 2987 Rogue Robotics to be a part of Alliance 2. We were having issues all day with the practice bot regarding how the drivetrain felt sluggish and slow, so despite the best efforts from the driveteam, as well as a well played match by all of Alliance 2, the practice bot was knocked out in the first round of playoffs just as the competition bot was.

Although we did lose, it was still match played with very close alliances! We would love to thank team 2798 Rogue Robotics for choosing us, as well as team 2846 FireBears for being fantastic teammates!

We used team 2052 KnightKrawler’s app for scouting. Since scouting is super important during competitions, we wanted to gain experience evaluating other teams based on their performance, and creating a good team composition. It wasn’t super important at this tournament, since we weren’t alliance captains, but it was good practice for future tournaments.

Thank you to all the volunteers that helped set up and tear down the event. Thank you

“Where on Earth is Chipotle?!?”